The world premiere of a new opera by composer Frances Pollock and librettist Bob Misbin, one of PARTNERS’ founding members! 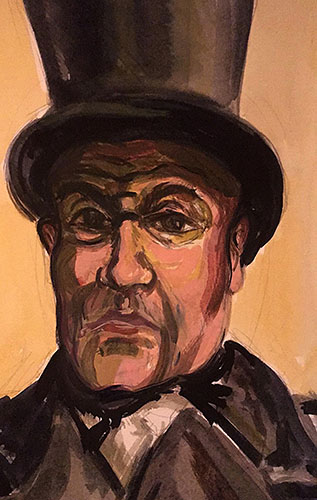 The setting is Bibione Spiaggia, a seaside town east of Venice, during the Ferragosto celebration in summer of 1929.

The action centers around a small hotel run by Soffronia and Michele Veronesi. Guests at the hotel include an Austrian family, headed by Edward Buchleiter. Edward is deeply troubled by displays of Italian nationalism in the town. The Austrian family is planning to cut their trip short but Michele persuades them to stay to see the famous magician, Briscula, who is coming to town that evening. Michele is deeply resentful of the fascist state that Italy was becoming under Mussolini. Michele had been injured in World War 1 while fighting the Austrians at the battle of Asiago, about one hundred miles northwest of town. But he bears no ill will toward his Austrian visitors. To the contrary, Michele recognizes that Edward shares his hope for a reconciled Europe, how things had been before the war when “people dressed up to go to the theatre”. Briscula’s performance would appear to offer an entertaining diversion that everyone could enjoy. As it turns out, Briscula is a fascist who targets individuals in the audience for mockery and humiliation. His final victim is Claudio, a sensitive young man who had been working as a waiter at the hotel. Claudio loves the flirtatious Silvestra but she rejects him in favor of the more overtly masculine Giovanni. Briscula mocks Claudio’s love for Silvestra, suggesting to his audience that Claudio is much too sensitive a boy for a woman like Silvestra. Humiliated in front of everyone, Claudio attacks Briscula, but Briscula is defended by a group of Mussolini supporters in the audience. Personal humiliation soon turns into political confrontation.

Thomas Mann published Mario und der Zauberer in 1929, the same year that he won the Nobel Prize in literature. The story is believed to be based on a trip that Mann and his family took in 1926, where they found that the Italy they had expected was in the process of being transformed into the fascist state under Mussolini. The climax of the story is a performance by the magician, Cipolla, who has the power to control his audience by rudeness and intimidation. His last victim is a young man, Mario, whom Cipolla hypnotizes into kissing him. The humiliated Mario shoots Cipolla dead, after which, the novella ends quickly.

At least three operas have been based on Mann’s Mario and the Magician. Inspired by Mann’s idea is the libretto for this new opera, Briscula, the Magician. The setting is also Italy under Mussolini but the story line is different. In this libretto, the magician, Briscula prevails.  This change stresses a different aspect of history. In Mann’s story, the shooting of Cipolla can be viewed as retribution for his terrible actions. Some commentators have seen the killing of Cipolla as foretelling the murder of Mussolini in 1945. But the history is more complicated. Departing from Italy in 1926, the family in Mann’s story could have believed that they were leaving the evil of fascism behind them. We know better.  With Hitler’s rise to power in 1933, Mann and his family were forced to leave Germany.  They settled in California but moved again in 1952 in the wake of Joe McCarthy. Mann died in Switzerland in 1955

MAN from the city – John Scherch

WOMAN from the city  –  Claire Weber

The libretto to Briscula, by Bob Misbin, is available from AMAZON as a Kindle ebook. Order tickets online at Belcantanti.com