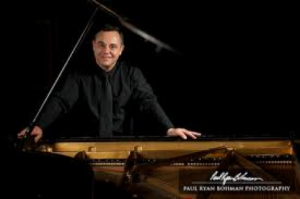 Pianist Ivo Kaltchev, a prizewinner of international piano competitions and a Bösendorfer Artist, is enjoying a successful performing career as a recitalist, soloist with orchestras, chamber musician, and recording artist.  Dr. Kaltchev has been a guest artist at music festivals in Spain, Germany, the Czech Republic, France, Bulgaria, Italy, Korea, China, and the United States and has performed in music centers throughout the world.  His critically acclaimed commercial recordings on the Bulgarian “Gega New” label include an all-Charles Griffes CD (hailed by the French magazine Diapason as “the most accomplished interpretation known until now”) and a CD with the world premieres of solo piano works by the French composer Florent Schmitt.  Dr. Kaltchev’s engagements for the 2012 concert season included recitals, a master class, and lectures in the United States, Thailand, Singapore, Portugal, Germany, Switzerland, China, Korea, and Austria.  In addition, he has judged numerous international and national piano competitions.  Dr. Kaltchev is an associate professor of piano and head of the piano division at The Catholic University of America in Washington, DC and is the co-director and founder of the Washington International Piano Festival.