PARTNERS’ TRIP TO BARCELONA and VALENCIA, SPAIN
to attend concerts and operas.
MAY 2 – 11, 2015 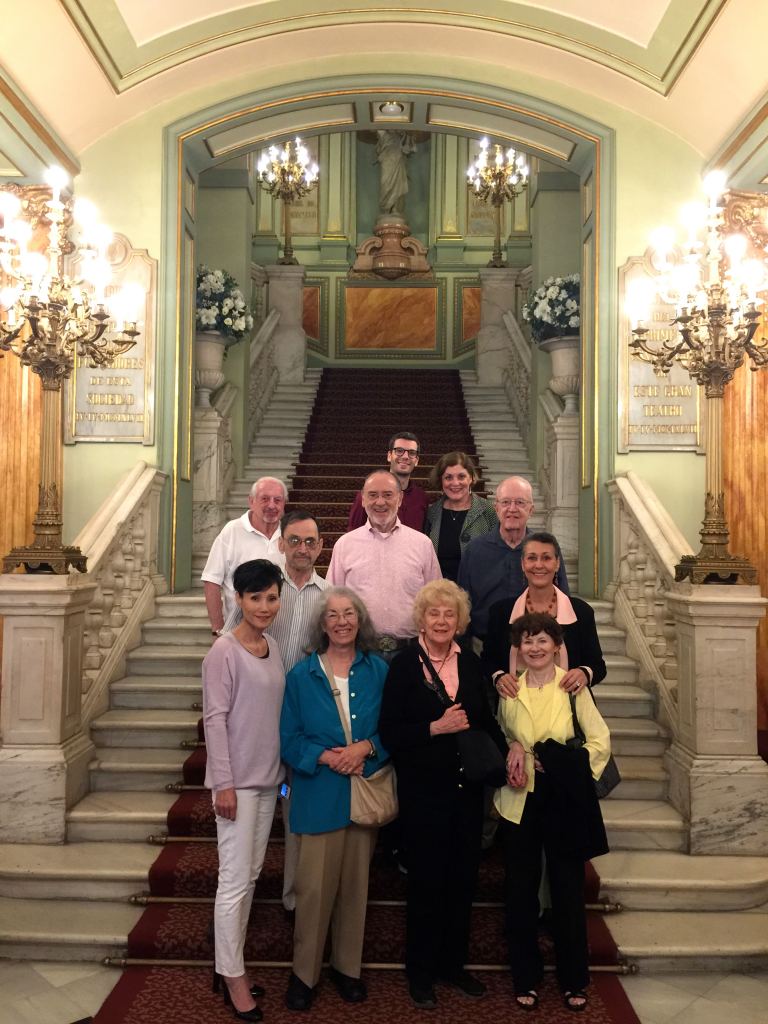 BARCELONA
Saturday, May 2
Arrive at the Hotel Neri. Afternoon at leisure to explore Barcelona, the vibrant, original, yet ancient city that is the capital of the autonomous region of Catalonia. It is a city rich in art and architecture, old and new, where Gothic churches compete with fantastic structures such as Antoni Gaudi’s Church of the Sagrada Familia. Architectural surprises are around every corner—from the many fascinating examples of Modernisme, the Catalan interpretation of Art Nouveau, to the medieval Barri Gotic neighborhood where the Hotel Neri is located. Picasso, Miro, and Tapies museums sit cheek by jowl with buildings housing collections that range from the Lower Paleolithic era and work their way up to the present time. Delicious offerings of local seafood and dainty pastries in the many restaurants and cafes make Barcelona a gastronomic heaven. Don’t forget to enjoy a glass of cava, the local, sparkling wine!

Evening
We will gather together for an optional, Dutch-treat dinner in our hotel’s restaurant so that we can meet each other.

Sunday, May 3
Evening
We will hear Verdi’s opera I Due Foscari at the Gran Teatre del Liceu.
The cast includes Placido Domingo, Ramon Vargas, Liudmyla Monastyrska, and Raymond Aceto, in a concert version of Verdi’s sixth opera.

Monday, May 4
Morning
A private, tailor-made tour of the Gran Teatre del Liceu with an English-speaking guide is our first activity. Although plain on the outside, the Belle Epoque opera building is opulent and extravagant inside. The tour will include the public areas of the auditorium, the Salon of Mirrors, the main entrance, and the foyer, then private areas backstage not usually open to the public such as the stage, rehearsal rooms, dressing rooms, and the wardrobe department. We hope to be joined by Christina Scheppelmann, formerly with Washington National Opera, who will become the Liceu’s artistic director in January 2015. Closer to our trip, we will learn if a visit with Placido Domingo will be possible.

After the tour, the impressive private club in the same building, the Circulo del Liceo, which houses one of the most important collections of Catalan Art Nouveau paintings, will open its doors to PARTNERS for the Arts.

Afternoon and evening at leisure.

Tuesday, May 5
We will make an afternoon and evening trip by our own bus with an English-speaking driver to Montserrat, whose jagged peaks can be seen from all over eastern Catalonia. On the way, we will stop at Cripta Gruell, a beautiful, less-visited building and UNESCO World Heritage Site designed by Barcelona’s best-known architect, Antonio Gaudi, for the textile workers in Santa Coloma de Cervello. Intended to be the first part of a church that was never completed, the crypt introduced many of Gaudi’s architectural advances and contains examples of his mastery of applied arts. Montserrat is one of the most important religious pilgrimage sites in Spain where the carving of La Moreneta, the Virgin of Montserrat, one of the legendary “dark” virgins of Iberian Catholicism, was found in a grotto on the mountainside in the 12th century; since then, many miracles have been ascribed to her. La Moreneta can be viewed in the Basilica de Montserrat, where, at 6:45 p.m., the Escolania, a renowned boys’ choir established in the 13th century, often sings “Salve Regina” and the “Virolai,” the hymn of Montserrat. Nearby is the Museu de Montserrat, which houses not only many religious works of art donated by the faithful but also works by Caravaggio, El Greco, Picasso, Dali, and Impressionist paintings by Monet, Sisley, and Degas. Of particular interest to Wagnerians is that these mountains and the castle of Monsalvat were the setting for much of Parsifal, the last opera that Richard Wagner completed.

Wednesday, May 6
The day is at leisure to continue exploring the many attractions that Barcelona holds.
Evening
We will hear the pianist Martha Argerich play Shostakovitch’s Concerto for Piano and Trumpet, No. 1, then Beethoven’s Symphony No. 4 performed by the Orquestra da Camera at the Palau de la Musica Orfeo Catala. Arrive early to view this extreme example of Modernista building, an extravaganza of ceramics, statuary, stained glass, wrought iron, and carved stone, with a façade composed of exposed brick embedded with colorful ceramic mosaics. Commissioned by the Orfeo Catala Choral Music Society, the first stone was laid on St. George’s Day, the feast of Catalonia’s patron saint, in 1905. An immense stained glass skylight representing a circle of female angels surrounding the sun as a choir—fitting for a choral society–tops the concert hall.

Thursday, May 7
We will travel to Valencia by inter-city bus and stay at the centrally located Hotel Palau del Mar.

Friday, May 8, Saturday, May 9, and Sunday, May 10
The days are at leisure to explore the city of Valencia, founded by the Romans in 138 B.C. It stands in the middle of Spain’s eastern Mediterranean coast at the heart of one of Europe’s most fertile regions. Subsequently controlled by the Muslims for 500 years, the city prospered and entered its Golden Age in the 15th century, when it overtook Barcelona as the financial capital of this area of the Mediterranean. In addition to its agricultural abundance and busy port, the city developed important ceramics and silk industries. However, when the Moors were expelled from Spain in 1609, the area and the city fell into decline because of the loss of most of its laborers. Now the third largest city in Spain after Madrid and Barcelona, Valencia today is laying out wide new avenues and investing in innovative architectural projects.

Architecture, old and new, is a major feature of Valencia too. The railway station is a stunning example of Art Nouveau, ornamented on the outside with bunches of sculpted oranges (a major local crop) and inside with stained glass and ceramic mosaics. Long important in Valencia’s economy, the ceramics industry is celebrated in the Palau de Dos Aigues, which houses the National Ceramics Museum. Close by is El Patriarca, which contains a church whose walls and ceilings are covered with frescoes and a museum housing an important collection of works by Spanish and foreign masters, including El Greco. One of the largest markets in Europe, the Mercat Central, is in Valencia. This enormous cathedral to food is located in a domed building that features stained glass windows and ornate doorways. The oldest part of the city, the Barridel Carme, holds two enormous fortified gateways, all that is left of the city’s walls. Nearby is the Institut Valencia d’Art Modern, one of Spain’s first contemporary art galleries. It contains works by Valencian artists, sculptor Julio Gonzalez and painter Ignacio Pinazo, and has an active program of temporary international exhibits.

Among the many pleasures of Valencia are the Royal Gardens (Jardines del Real), the Fine Arts Museum (Museu de Belles Arts), and the bustling port area where waterfront restaurants offer a paella paradise. The waterfront district has been completely redeveloped, in part to host the America’s Cup yacht race and to accommodate The Valencia Street Circuit, which has been used for the European Grand Prix since 2008.

Friday, May 8
Evening
We will attend a concert of the Orquesta de Valencia performing Brahms’ Symphony No. 3, Saint-Saens’ Cello Concerto No. 1, and Ravel’s Bolero, featuring Truls Mork, cello, and Yaren Traub, conductor, at the Palau de la Musica. Norwegian cellist Truls Mork was the first Scandinavian to be a finalist and prizewinner in the Moscow Tchaikovsky Competition since 1966. He made his debut at Carnegie Hall and the Kennedy Center in 1994. Israeli-born conductor and pianist Yaron Traub has been the principal conductor and artistic director of the Orquesta de Valencia since 2005. Before that, he was Daniel Barenboim’s assistant at the Bayreuth Festival and the Chicago Symphony Orchestra, where he served as assistant, then associate, conductor. An example of the new Valencia of the Third Millennium, the Palau de la Musica looks like a giant greenhouse, with live plants flourishing inside. Since opening in 1984, its acoustics have made it one of the foremost concert halls in Spain.

Sunday, May 10
Evening
We will hear Verdi’s opera Nabucco, sung by an international cast headed by Greek baritone Dimitri Platanias, Armenian mezzo soprano Varduhi Abrahamyan, and American tenor Brian Jagde, conducted by Italian Nicola Luisotti, currently the music director of San Francisco Opera and formerly the music director of the Teatro di San Carlo in Naples, at the state-of-the-art Palau de les Arts Reina Sofia. The theatre is one of four buildings (the others are a science museum, an aquarium, and a planetarium) located in the spectacular City of Arts and Sciences, a massive, 21st-century complex designed by the renowned Valencian architect, Santiago Calatrava. It is also home to the Centre de Perfeccionament Placido Domingo for young singers.