Maestro JAMES HARP is the artistic director of Maryland Opera, where he is building a comprehensive, innovative opera and opera education/outreach program to serve the entire State of Maryland. He is pursuing and nurturing partnerships and collaborations with local and national arts organizations to sustain the operatic art form in perpetuity.

Mr. Harp is well-known in the Baltimore area as a pianist, organist, stage director, singer, composer, lecturer, writer, and conductor. He holds bachelor’s and master’s degrees from the Peabody Conservatory of Music. Mr. Harp was the artistic administrator of the Baltimore Opera Company beginning in 1989 and its chorus master starting in 1993.

Since 1983, he has served as organist for the Baltimore Symphony Orchestra and, since 1987, has been the cantor (organist/choirmaster) for Baltimore’s historic St. Mark’s Lutheran Church, where he also serves as artistic director of the St. Cecilia Society Concert Series. Since 2009, he has been the principal accompanist and chorus master for Baltimore Concert Opera. He is a coach/accompanist with the Wagner Society of Washington, DC and is on the opera faculty at the Peabody Conservatory. Knowledgeable in many areas of music, Mr. Harp has lectured extensively on opera in many venues, among them the Towson Arts Festival, the Maryland Opera Society, the Biblical Archaeology Society, and the Joy of Opera Series. He is also a judge for regional and district Metropolitan Opera auditions.

Sought after as an orchestral musician and accompanist, Mr. Harp has been a featured soloist with the Baltimore Symphony Orchestra in works ranging from Saint-Saëns’ Organ Symphony to Lloyd Webber’s The Phantom of the Opera. He has appeared as continuo (harpsichord/organ) soloist with many local orchestral and choral groups, where his informed and theatrical realizations of baroque figured bass have won acclaim. Accompanist to many local singers, many of whom feature his compositions, he has also accompanied such artists as Elizabeth Futral, Stephen Costello, Leontyne Price, Marilyn Horne, Sherrill Milnes, Licia Albanese, Anna Moffo, Chris Merritt, Lucine Amara, and Paul Plishka. His appearance with Miss Futral and Mr. Costello was a part of the noted Vocal Arts Society of Washington, DC series at the Kennedy Center. 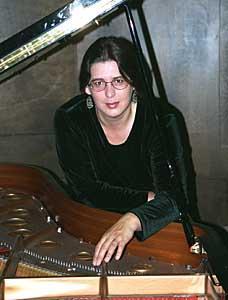 KATERINA SOUVOROVA is an accomplished pianist as well as a distinguished professional opera and vocal coach. She earned her D.M.A., M.M., and Artistic Diploma degrees with highest honors in piano performance from the Conservatory of Belarus. Following her studies, she taught piano at the Conservatory of Belarus. She also was a coach for the State Academy of the Bolshoi Opera in Minsk for more than 10 years, where she worked with internationally known conductors, producers, and singers.

Dr. Souvorova has lived in the United States since 1996 and was one of the founders of a new community opera company, CPCC Opera Theater, in Charlotte, NC, where she served as music director. As a soloist and collaborative artist, she has made numerous recordings of repertoire that spans a wide range of composers and nationalistic styles.

Dr. Souvorova is the founder and general and artistic director of Bel Cantanti Opera. She started the company in 2003, working with a handful of young singers, preparing Menotti’s Amahl and the Night Visitor, Bel Cantanti’s first fully staged opera production. Through her love for the music and art of opera and her desire to support young operatic talent, Dr. Souvorova continues to develop the company and lead it from one success to another.

Dr. Souvorova’s work was highly acclaimed by Joe McClellan, the late classical music critic emeritus of The Washington Post, who said: “…Katerina Souvorova [is] a pianist of international stature and [a] vocal coach of extraordinary talent…. We can credit her with a high level of skill, both in music and in human relations, and an even higher level of determination. Perhaps that is why, observing Souvorova in action, I keep being reminded of my first close operatic acquaintance, Sarah Caldwell.”

Maestro JOSEPH WALSH has nearly three decades’ experience in preparing, presenting, and conducting opera and musical theater in Virginia, across the United States, and internationally. He is a conductor admired for his ability to combine dramatic flair and theatrical excitement with sensitivity, detail, and a keen sense of dramatic pacing. Recently, he was music director for The Pirates of Penzance at Riverside Dinner Theater and Christmas at the Old Bull and Bush; George, Don’t Do That; and Master Class, all at Alexandria, Virginia’s Metro Stage.

He has been music director with the In Series in Washington, DC, where he debuted with a production of Kabarett & Cabaret, conducted performances of Fidelio, and opened their 2016-17 season with a double bill of La Serva Padrona and Trial by Jury. Mr. Walsh was involved in the musical preparation of more than 65 productions at Virginia Opera, where he served for 17 years, most recently as associate artistic director and conducted productions of Madame Butterfly, Don Giovanni, The Daughter of the Regiment, and Susannah, among many others. Subsequently, for three years, he was general director with Lyric Opera Virginia where, among many highlights, he conducted The King and I with Broadway stars Lisa Vroman and Kevin Grey. In addition to these positions, Mr. Walsh conducted at the Amalfi Coast Music Festival in Italy for five summers. He served as pianist for two summer programs at the Maputo Music Festival in Mozambique, Africa and conducted for two summers at George Mason University’s Korean Summer Institute in Seoul. He has conducted many orchestras in performances, including the Virginia Symphony Orchestra, the Richmond Symphony Orchestra, the Kansas City Symphony, the Cluj-Napoca Philharmonic Orchestra of Romania, and the Collegium Philarmonicum of Naples, Italy. He has also been music director for productions at The Delaware Children’s Theatre and Three Little Bakers’ dinner theater, both in Wilmington, Delaware. Mr. Walsh is an active recitalist, accompanying both classical voice recitals and Broadway cabarets.

Currently, Mr. Walsh is a faculty member at George Mason University’s School of Music and School of Theater, where he serves as conductor, music director, coach, and pianist. Recently, he was music director for productions of Rags, Big River, Merrily We Roll Along, Dido and Aeneas, La Bohème, Iolanthe, The Marriage of Figaro, and The Magic Flute.

Mr. Walsh serves as artistic advisor for all classical voice programs offered by the Washington, DC chapter of the National Society of Arts and Letters. He has taught numerous voice master classes and judged many vocal competitions, including the Metropolitan Opera’s National Council Auditions (Middle Atlantic District), The National Society of Arts and Letters’ DC Chapter’s Dorothy Lincoln Smith Voice Competition, PARTNERS for the Arts’ National Opera Competition, and the Charles Williams Voice Competition at Levine Music, where he also serves on the faculty. Mr. Walsh has served on the Virginia Commission for the Arts Touring Panel, as well as on the coaching faculties of the Esther Boyer College of Music at Temple University in Philadelphia and the American Institute of Musical Studies in Graz, Austria. He has written several children’s opera programs, including Giovanni and the Beanstalk and The Wonderful Wizard of Opera, which have toured schools throughout Virginia. Mr. Walsh maintains a private coaching studio at his home in Springfield, Virginia.