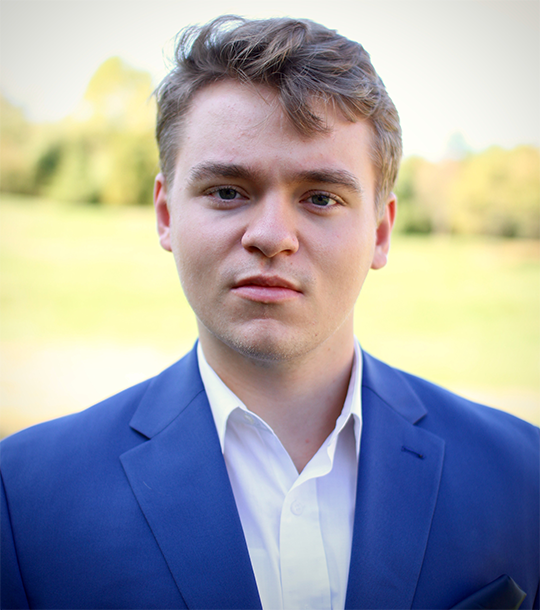 Tenor MICHAEL BUTLER, although still a student at the University of MD, is already a well- known and sought after artist. Recognition of his talent began in 2015, winning First Place in MSMTA’s Classical Voice Competition, First Place in the 2017 MTNA’s National Voice Competition, Second Place in the 2018 AAMS International Voice Competition, 2018 Winner in the National Young Arts Foundation Vocal Competition, and in 2019, he was selected for an Encouragement Award in the Metropolitan Opera National Council Auditions, Capital District. Principal roles performed include the title role in Rossini’s Le Comte Ory for the Chicago Summer Music Festival, and locally “Doncaire” (Carmen), the “Messenger” (Aida), and Prince Sou Chong (Land of Smiles) for the Washington Opera Society, “Tamino” (The Magic Flute) with the Bethesda Music Festival, and “Borsa” (Rigoletto) and “Lykov” (The Czar’s Bride) for Bel Cantanti Opera. Just prior to The Merry Widow performance with the Trinity Chamber Orchestra and Partners for the Arts singers, Michael will have completed multiple performances of “Claudio” for Bel Cantanti’s world premiere of Briscula the Magician, music by Frances Pollock, libretto by Bob Misbin, one of Partners’ founding members. Future engagements include the title role in Faust for a new company – Washington Lyric Opera, and a Young Artist Residency with Des Moines Metro Opera in the 2020 summer.