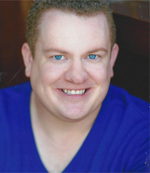 Praised for his versatility, Mr. Baumgardner has sung a variety of well-known operatic roles.  Recently, he has appeared as The Celebrant in Mark Adamo’s short opera, Avow; Rodolfo in Capital City Symphony’s La Bohème; and Borsa in Annapolis Opera’s performance of Rigoletto.  Other notable roles performed are Lensky in Eugene Onegin, Nemorino in L’Elisir d’Amore,  Rinuccio in Gianni Schicchi, Ferrando in Così Fan Tutte, and Camille de Rosillon in The Merry Widow, as well as more obscure, contemporary works such as Adam in Patrick Soluri’s Adam and Eve, M in Jonathan Sheffer’s Camera Obscura, and The Englishman in Jacques Ibert’s Angélique.  Mr. Baumgardner has also had the great honor of singing several scenes as Lenny in Carlisle Floyd’s Of Mice and Men (based on the novel by John Steinbeck) at a benefit for the composer himself.

In 2010, Mr. Baumgardner made his European debut singing the role of Tamino in Die Zauberflöte at the Mittelsächsisches Theater in Freiberg, Germany. He also stepped in on short notice to sing several performances of the Erster Geharnischter when the house tenor became ill.

Mr. Baumgardner is a past winner of the Hannah Beaulieu Vocal Competition, the second-place winner in Partners’ 2013 Vocal Awards Competition, and, more recently, was named a finalist in the Metropolitan Opera National Council Auditions in the Mid-Atlantic region.

Mr. Baumgardner also enjoys an active career as a concert soloist, appearing in such works as Handel’s Messiah, Beethoven’s Ninth Symphony, and Haydn’s Harmoniemesse.  Recently, he has performed as a soloist in Mozart’s Requiem and Coronation Mass with the Easton Choral Arts Society.  In February, Mr. Baumgardner sang for Their Excellencies the Ambassadors of Russia and Ukraine as a soloist in the Cathedral Choral Society’s performance of Rachmaninov’s Vespers.