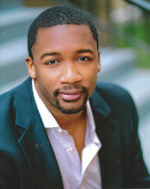 PARTNERS’ first-place prizewinner in last year’s vocal awards competition, Norman Garrett, starred as the sailor’s friend in Le Pauvre Matelot presented by Wolf Trap Opera on August 8, 10, and 16.  This dark, early work composed by Darius Milhaud, with a libretto by Jean Cocteau, was given its Washington area premiere with these performances.  It was part of a double bill of two surreal operas, the other being the comic Les Mamelles de Tiresias, with music by Francis Poulenc and libretto by Guillaume Apollinaire.  This was Norman’s second appearance with Wolf Trap Opera this season, his first being as Escamillo in Bizet’s Carmen.