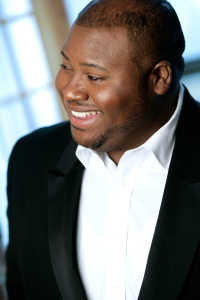 One of America’s most promising tenors, Issachah Savage, will perform on the Kennedy Center’s Millennium Stage on Sunday, June 2, 2013, at 6 p.m., singing an all-Wagner program.

A native of Philadelphia, but a Washington, DC resident for many years, where he enjoyed a performing and teaching career, Mr. Savage has just moved to New York City.  The winner of numerous awards, among them the Grand Prize of the Marcello Giordani Foundation Vocal Competition and, locally, second-place winner in the Bravissimo Competition of Virginia Opera, Mr. Savage will leave immediately after his Kennedy Center recital for San Francisco, where he will join the prestigious Merola Opera Program, San Francisco Opera’s training and performance program for promising young artists.

Most recently, Mr. Savage studied with the Dolora Zajick Institute for Young Dramatic Voices.  He is an alumnus of Morgan State University, where he studied with the late Dr. Nathan Carter.  With both dramatic and lyrical qualities, Mr. Savage is comfortable performing on opera as well as concert stages. Well-traveled throughout North America, Europe, and South Africa, Mr. Savage has sung under such respected conductors as Kurt Masur, Nathan Carter, Robert Shaw, Marin Alsop, and Julian Wachner.