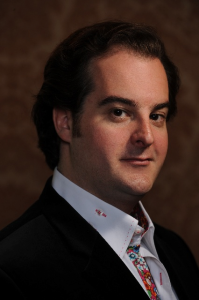 Cuban-American tenor Rolando Sanz is quickly gaining recognition for his “sensitive” and “luminous” portrayals of such roles as Rodolfo, Tamino, Nemorino, Alfredo, and Pinkerton.  This past season, he sang the role of Rodolfo in La Bohème with Toledo Opera and the Duke of Mantua in Rigoletto with the Boston Youth Symphony Orchestra and Annapolis Opera.  In November, he will perform Alfredo in La Traviata with Florentine Opera and, in 2014, he will debut with the Seattle Opera as the Duke of Mantua in Rigoletto.  Future local engagements include the tenor soloist in Verdi’s Requiem with the Cathedral Choral Society in October and Ismaele in Nabucco with Lyric Opera Baltimore in May 2014.  Additional recent engagements include Arminio in I Masnadieri with Washington Concert Opera; Paolo in Francesca da Rimini with the Princeton Festival; his debut with Caramoor singing Rodolphe in Guillaume Tell; Nemorino in L’Elisir d’Amore with Opera Idaho; and L’Aumônier in Dialogues des Carmélites under the baton of James Conlon at the Aspen Music Festival.  Other Aspen Festival appearances have included Mozart in Rimsky-Korsakov’s Mozart and Salieri and Lippo Florentino in Street Scene.  Other recent engagements include Peter Doyle in the west coast premiere of Lowell Liebermann’s Miss Lonelyhearts, for which the Los Angeles Times reported: “Rolando Sanz, as Doyle, gave the best hint of the score’s expressive possibilities.”  Mr. Sanz is a graduate of The Catholic University of America and Yale University.  He is also the artistic director of our newest partner, Young Artists of America (YAA), whose mission is to create educational and performance opportunities of fully orchestrated works that are not a part of any existing vocal, orchestral, or dance ensemble’s repertoire.  YAA focus specifically on large-scale works that require full orchestration, including opera, musical theatre, oratorio, and dance.  YAA is the first known program of its kind in the nation to specialize specifically in performing opera with all high school students and a full orchestra.